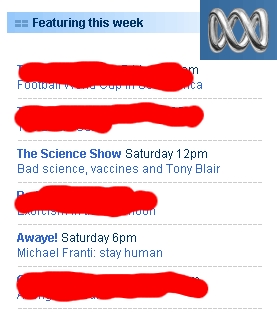 You’ve described Radio National as the jewel in the crown of the ABC. I don’t understand why you would allow the removal of some of the most distinctive gems.

The ABC Media Release describes the shelving of eight programs. The justification given is the need for more digital broadcasting resources following the success of RN podcasting. 1.7 million downloads a month, 50% of all the ABC’s downloads and 125% higher than the previous year.

Why has podcasting been so successful for RN? Do you think it might have something to do with the PROGRAMMING? It is of course good practice to review programming but what confuses me is the removal of highly distinctive shows. For example:

There is no other program in the electronic media that addresses sport the way that The Sports Factor does. It deals with the culture of sport; from a spectator’s, administrator’s, coach’s and player’s viewpoint. It is moving and insightful. Are they words you associate with any other sports show? A great loss to the media. Its replacement is the show that reviews movies. Actually, movie review shows work better when you can SEE a snippet of the movie being reviewed and what do you know? There are ALREADY two TV shows on the public broadcasting network dealing with this!

The Media Report: analysing the media during a time of critical change in a way that commercial broadcasting has not been able or willing to do. If anything, a program limited by its half hour format, needing longer to properly deal with complex social and political issues.

And the Religion Report. Mark, as you know, I’ve been a liberal atheist all my adult life. So when I listen to someone like Robert Silico, a right wing, conservative thinker, and he argues a case for Christianity as the foundation of liberal values (and he argues the case well) I am learning something. I am being challenged. That sort of radio flicks my switches.

Again, there is no program in Australia that covers this territory; the contest for influence within each religion, discussion of the role of religion, explanations of religious viewpoints… In the broadest possible sense it is a call for religious tolerance.

The Media Release also says that podcasts are attracting a younger listenership. So what? Radio National’s market segment is not an age bracket; it is people who like intelligent discussion. You already have a youth network. The reason for the lower average age of a podcasting listener is simply that they are more comfortable with the technology. The success of podcasting is not a reason to alter your programming mix; it is a result of your programming mix.

Footnote: Stephen Crittenden, presenter of the Religion Report, was critical on air of the ‘decommissioning’ and has been stood aside pending an inquiry. Management don’t like staff questioning their decisions but because of the importance of these programs in the public eye, you should cut a little slack. The debate as to what is aired should be public. I can even imagine it becoming a Radio National show. Call it ‘The Media Report’.