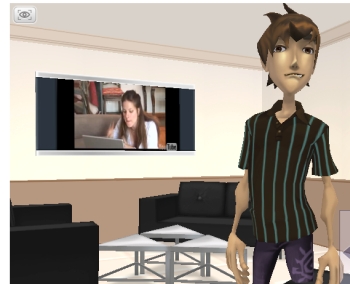 Lively is described as Google’s answer to Second Life. It’s not. Second Life is a virtual world; Lively is chat software with 3D avatars. It’s browser-based, as opposed to Second Life, which operates with separate software, like a computer game. Contrasting the two environments highlights the originality of the Second Life product. Lively is imitative and cut-down in every respect. Conceptually barren. This is by intention; the Second Life interface has proved too daunting for most people. I note that they used to think that computers were too complicated for the mainstream too.

The interesting aspect of Lively is the ability to embed the interface in a web page, effectively offering interactive 3D chat on a web site. For a business, this has the same limitations of normal chat software, ie it only works if you allocate staff to interact with people. Kind of the opposite to what businesses tend to want these days. You can imagine teleseminars and teleconferences working this way, if they get the wrinkles ironed out.

And there are a lot of wrinkles. It’s painfully slow. There is no orientation. Things don’t work. Movement is difficult. Thousands of bad first impressions are being created as you read this. This is no way to run a ballroom.

My friends at Millions of Us are one of two development partners and have created a themed room for one of their clients, National Geographic. So; themed rooms, limit of 20 visitors at a time: looks like a similar scaling problem to Second Life’s.

Lively’s launch has overwhelmed another entrant in this space. Vivaty. It is easier to understand, is less ambitious than Lively and seems to work better, though I haven’t seen it under load.

Vivaty also allows you to embed your room in a web page (coincidence). Like Lively, it offers to suck you across from Facebook (just a coincidence). Quite an unsettling experience walking into your Vivaty room for the first time to find the walls covered with pictures of people you know. It loads pictures randomly from your Facebook account.

But most people I know don’t dwell in Facebook. It’s a ‘touch base’ medium. This is at odds with the 3D chat idea, which is conversation. I would have thought the concept was a better fit with MSN than Facebook.

Always risky making an assessment early on, but here goes. Lively will disappoint almost everyone who ventures into it, will get a reputation as nothing special and die of embarrassment. Vivaty will struggle to move people across from Facebook in sufficient numbers to give it traction. Both are kludgy and compare poorly to their 2D rivals.

Not through to the next round.