Late to the party, as usual. Couple of days ago, Twitter CEO Jack Dorsey invited suggestions from users about the future of Twitter.

Thought: rather than identifying new features, we need to get clear on what useful function Twitter can perform better than anyone else. I believe that is ‘influence’.

So improve how you measure and share that. Give us analytics and improved visual access to conversation threads. Present efforts to show threading are confusing. Don’t mess with the recency format of the home page, (most recent posts always on top), but take threading into another view. Give us an alternate horizontal view that shows the thread with beads of influence. This would be a standard left to right timeline, with each user on their own horizontal line. 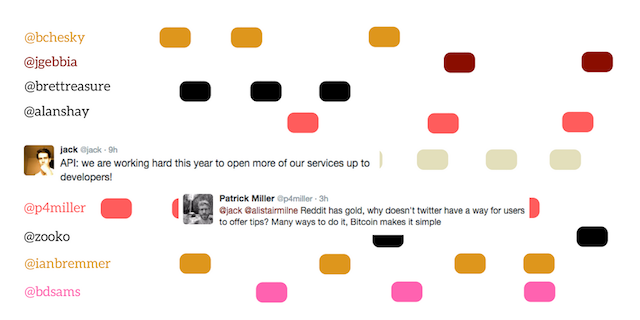 Those most tightly engaged in the topic would be clustered around the tweet selected. Engagement might be weighted by # reads, # hearted, RT, @ replies and so on. Then give us the ability to instantly turn that cluster into a list. And give us other GREAT analytics.

Make the measures of influence transparent and actionable. Perhaps that’s a premium service.

And secondly, consider how to give users with smaller numbers of followers more influence. The attraction of Twitter is the ability to create an audience through quality curation and content. If you reward us with influence, we will create compelling content and the rest will follow.