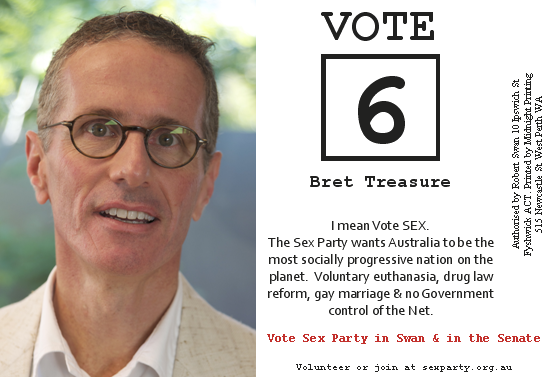 Maybe it’s just me. I find myself constantly between the amusing and the effective. Here’s a classic case. Tasked with the job of creating an election leaflet for my candidacy in the Federal Election, I couldn’t resist a dig at the predictability of the election leaflet: Picture of candidate. Vote 1. Australian flag if it’s for the Libs.

I’m confident the ad will get more cut-through than the average flyer. It’s more likely to be read. The risk is that people will decide the Sex Party aren’t taking things SERIOUSLY. It’s quite a big risk because the Party is already ‘out there’ by virtue of its name and platform.

On the other hand, it’s not a style of advertising the competition can use because it’s very difficult to get anything satirical through a committee. They just take themselves too seriously. The Sex Party doesn’t like committees because they remind people of things other than sex.