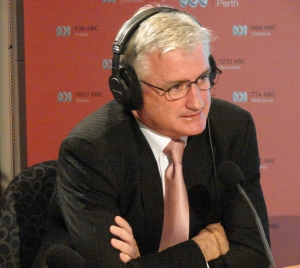 The ABC are advertising their Local Radio stations on the teev. Fair enough. The ad features snatches of audio from a range of different programs and a fairly static visual background. It’s dreadfully unappealing.

When you watch television, and this will come as a shock to most of you, your brain is expecting visual stimulation. Colour and movement. And for the most part, it expects the visual to match the audio. If the lip sync is wrong, the brain doesn’t like it.

With television your visual centres demand movement. So certain kinds of static or slow moving programming don’t work that well. Parkinson for example. Television requires rapid cuts. Even the News now hardly shows ‘head of newsreader’. It cuts away to story and graphic over and over. Constantly capturing our attention with the next flicker of change. It’s packetised: eye grabs. We don’t really have programs any more, just non-stop cut-through.

When you listen to radio, your visual attention is not called for so you can move freely in space. Because you’re less constrained your imagination paints a picture that fills in the gaps. As a result, a well told story can be more powerful on radio than on television. When you watch television, the brain is largely occupied interpreting visual stimulus. When you listen to radio, the brain is more free to imagine.

So, given that radio is a different experience, how do you convey that? The current TV ad presents radio as an inferior version of TV. All the audio but nothing to look at. Playing radio sound grabs on television is like promoting a newspaper on television by showing photographs of news articles.

1. Film people talking. Just because the audience can’t see the DJ while listening doesn’t mean you can’t show them the DJ talking to someone in a studio. It’s TV advertising. Give them a TV experience.

2. Black the screen while you run the audio. This will make people listen differently. Use a full 60 seconds telling a story. Or longer.