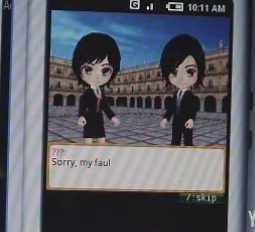 Just because you can create a virtual world like Second Life on a mobile phone platform doesn’t mean it’s a good idea.

Lamity is a new virtual world on a mobile phone platform. It’s built on Google’s Open Source software, Android. Lamity is about to launch in Japan, the world’s most sophisticated mobile phone environment. The company (whose slogan translates into English as ‘the enjoyments between man and man’) say you can put 400 avatars in the one ‘town’ which compares favourably to Second Life. But this is specious, since the small screen and the limited navigational ability of Lamity won’t give you any meaningful sense of togetherness. It’s a very limited 3D environment.

The platform allows your avatar (and others) to view web pages in-world. This is also not a very big deal. If I want to view a web page I want full web navigability. I don’t want two little avatars standing in front of it.

Thirdly, you can view movie previews in-world. Walk your avatar into a cinema and activate the screen. Once again, if I want to see a movie preview I don’t want to have to navigate another interface to get to it. You can watch movies in Second Life too but a movie is a 2D experience. If you’re watching it inside a 3D environment your brain wants one or the other. If the principal narrative is in 2D, that’s where your focus will be. May as well watch that in full screen mode.

I’m not saying virtual worlds can’t work on a mobile platform but I think instead of creating imitations of existing virtual world platforms developers need to design for the small screen. It’s big enough for one or two faces. That would be a good place to start.