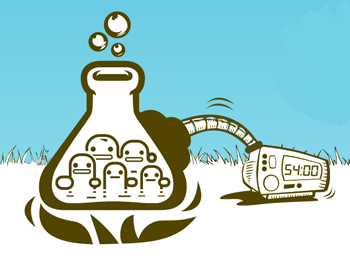 Startup weekend is on in Perth; first time. Hundred people trying to create a web product in a weekend. Last night I saw 45 x one minute pitches. Then all participants chose their favourite pitches. After some filtering, everyone joined a team and work began, with occasional interference from mentors.

I attended as an observer.

The pitches: simple ideas, simply expressed were most successful in attracting votes. So were those that included ‘I’ve already created three startups; one is turning over a million dollars a month’. Everyone wants to be on a winning team.

Interestingly, the guy with this background reeled in followers based on one business concept but his group soon pivoted; a completely different concept developed. I took this as a sign of effective collaboration though I didn’t witness that first hand.

Another group was problematic. The coders were doing their thing, apparently oblivious to foundational discussions on the other side of the table. One of the devs made two insightful comments that were completely ignored by the team leader. Not only did he miss the value of the suggestions; the non-verbals communicated a lack of respect. I think he mistook a motivated multidisciplinary team for a galley of slaves and I fear it’s going to end badly. Or at least fall short of its potential.

Elsewhere I watched technology get in the way. A white board pulled some of the group towards it. One man left at the table stared at a screen of collaborative software. The others sat unconnected; occupying their own ideas like territory.

Two adjacent groups were almost immediately fluid. Ideas flowed back and forth – everyone got heard and you could see the shape of the business move in real time. At one of these I saw the whole business case dissolve when a researcher found a web site already providing the service they were planning. Time to start over.

And another group: a stubborn attachment to a particular technology that no-one could translate into a distinctive interface or proposition. The frustration palpable; not helped by a mentor who laughed in their faces.

A fascinating view of behavioural dynamics in a pressure-cooker environment. Teams were provided with templates for starting a business (define your target market, what is your unique value proposition etc) but no framework for cooperation was provided. What showed up was the awkwardness of human interaction and the problem of the entrepreneurial ego.

Nonetheless, a great learning experience for all involved – can’t wait to see where they end up on Sunday.

Here’s my ten cents’ worth for future participants: