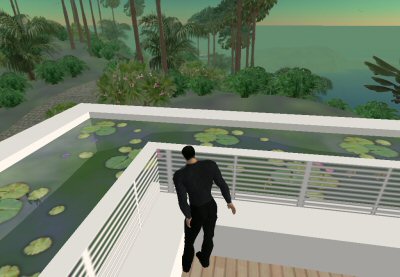 When I told a tech friend of mine I am taking my consultancy business inside an on-line computer game and am paying thousands of dollars for the privilege, he laughed at me. I have recently become aware of a game called Second Life which I believe will turn out to be one of the most profound influences on business and society this century. How could I not be involved in that?

It’s not fair to describe it as a game, it’s a virtual world. A game is about winning. Whereas Second Life is a platform for social and commercial development.

It is different to online games such as World of Warcraft, in at least four ways.

Firstly, the SL currency, the Linden Dollar has a $US conversion rate, allowing residents to sell real world goods in the game. The company who control the game, Linden Labs, do not discourage this.

Secondly, residents of the world are able to use 3D rendering tools and the platform’s scripting language to fashion their own environment. The result is an incredible outpouring of creativity generated mainly by role-playing gamers and graphic artists. All of this acts as a backdrop to the social side of the world, which is its strength. In part, SL is the new MSN. Instead of chatting while looking at text you are chatting while shopping for virtual clothes together, or exploring gothic dungeons. It is a far more immersive and more compelling environment.

The ability to relate to other people while disguised as a 3D animated self (an avatar) lends a fascinating social dimension to the game. Everyone can be beautiful in SL. The girls look like Barbie dolls, the boys look like Mr Universe. But there is enormous diversity there and some people also assume non-human forms. It makes for an interesting overlay to a normal text conversation.

Fourthly, there is a political undercurrent in Second Life. In-world protests, marches and activism reference what is happening in the real world.

If you make it inside SL, my in-world name is biscuit carroll. You can IM me once inside and I’ll have the Free Beer office set up there shortly. Drop in for a pint.