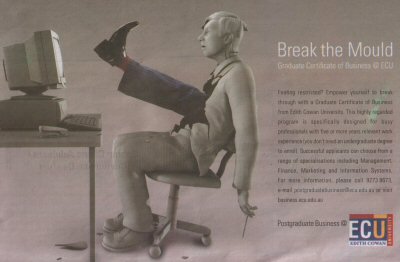 A campaign is a series of ads with some recognisable consistency between one ad and the next. Seldom done in education advertising here. Each department seems to have its own ideas. This is the only print campaign I’m aware of in recent times in the WA market.

A good campaign occurs when an ad receives a higher cut-through than it would as a stand alone ad; ie the individual ad benefits from the history of previous advertising. Example: the Apple iPod bus-stop ads.

Each one adds something to the overall imagery of the campaign and because the visual legacy is strong and positive, each new ad is immediately recognisable.

The ad pitches to experienced but uneducated business executives who want a formal qualification. But why would you portray your target market as personality-devoid plaster castes? “Hey, drone, your life is boring. Come and do some lectures, sit some tests.”

The ad is unfriendly, gray and intimidating. Yeah, I’d really want to go to a university like that.

What sort of people launch into tertiary education AFTER they’ve started a business? Ambitious people. People who think they’ll derive a benefit. So show them a benefit in your advertising.

It’s an awful campaign. The ECU marketing people should be put in plaster castes and the ad agency should be made to study tax law.